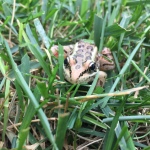 It’s flu shot time again. The CDC has key facts on their website about the shot if you have any health-related questions. There are a few places you and your family can get their flu shots.

It does take a little while to provide protection so you’ll want to get your flu shot sooner rather than later. However, you may want to wait until at least October before getting the shot. It’s especially important to hang on a little longer if you’re over 65. See the NPR article for additional details.

Yes, it is Possible to Get Your Flu Shot Too Soon – NPR

Ultimately, you want to talk to your doctor about what’s best for your unique situation. If the vaccine is plentiful this year, it may be an option to give the shot early and then get a second dose — as a booster — later on in the season. All that said, it’s better to get the shot early than not to get it at all. If you think you’ll forget if you don’t jump on it right now, by all means, go ahead and get the flu shot.

I already took my son in for his because of his genetic condition. It makes it tough to get him to gain weight. The last thing we need is for him to catch the flu, early or late in the season. Hopefully, the flu shot does provide some protection for him this year. Last year they tested his immunity to the flu for unrelated reasons and found he had developed no immunity to it whatsoever. According to his doctor, as he gets older his immune system will mature and respond better to vaccines.

Take good care of yourselves this flu season!