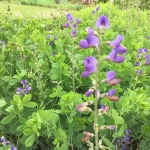 Not sure how many people know this. I certainly had no idea before this past week. Noonan’s Syndrome carries a decently high probability of having a bleeding disorder of some kind or another. Having a bleeding disorder can mean a lot of different things. Sometimes the bleeding is slow to stop. Sometimes the wound re-opens easily for multiple different reasons. I didn’t know any of this until our son took a spill face first onto the hardwood floor from standing height. He falls a lot but this one was different. A blood vessel in his head burst on contact.

Instantly he had a golf ball sized lump on his head. I wasn’t sure how serious that was so I was dialing the pediatrician when it gradually doubled in size before my eyes. Suddenly, I didn’t feel so comfortable waiting on hold. I called our emergency number and waited for the medics to arrive. When they came in the lump was about 90% of the size it would eventually become. They advised I take him in as a precaution so we grabbed my purse, both of our shoes, and loaded him into the ambulance.

What was going to be a quick observation in the pediatric emergency department turned much more complicated once they contacted our son’s hematologist. He had been brought on board originally to work towards diagnosing our son before full exome sequencing was performed. The on-call physician was familiar with Noonan’s Syndrome and requested labs and a CAT scan. Both came back OK and we would follow up with the hematologist on Monday.

At the Monday appointment, I finally heard the full explanation for the source of concern. It’s not that they expect our son to have difficulty healing, they’re concerned getting the bleeding to stop might be more difficult than it should be. He does bruise easily, leading me to share their concern. I would follow through with the testing anyway even if I didn’t think it would come back positive but I’m truly worried it might. The doctor ordered a screening test. We’re still waiting to hear back on the results.

I’ll update when we know more. This has been an unexpected event all around and we’re still very much in the middle of figuring things out.