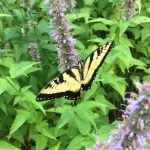 My Mother moved in with us last week. There was an open invitation, but it had been open for a while. She’s been invited down for at least a year and had been putting off moving in. She was hoping the problems that forced her hand would resolve themselves. They didn’t, and as they grew worse the push to make the transition finally overcame the effort required.

The first week was a little rough. Our son likes having my full undivided attention, and the cat wants the rest. Both of them were a clingy mess over the past week as they jostled for who would get me next. I’m so relieved the competition is coming to an end. I’m pretty certain no one is getting any less love or affection than they got before. I can only assume the anxiety of the moment drove the whole mess, and everyone is now content to be back where they were before. I guess I do have to admit, it was a lot of work to get my Mom settled. They might’ve had to sacrifice a little of my attention for me to help her get comfortable.

Overall her presence will definitively be more of a help than a hindrance. My husband and I have gone out to lunch alone the last two weekends. That’s unheard of, and it alone justifies sharing our space. The fact she also cleans up after herself and helps with the chores is a bonus. It’s also taken a lot of burden off of me. I no longer have to worry about someone getting to my son right away if I go up the stairs to switch over the laundry, fold the bed, or put things away.

I hope the reasons for her having to make the move resolve themselves sooner rather than later. That said, it’s good to have a second pair of hands. It’ll probably work out better all around if she can stay for a while.